Around the Christmas of 1943, the group purchased a Fifth printing of the First edition of our beloved Big Book. It was sent to our co-founder Bill Wilson, for inscribing. It was then sent to Dr. Bob Smith for his inscription. Also signing it were Marty Mann, the first woman in AA, Bill Dotson of Akron, the first member after the co-founders, Archie Trowbridge, the founder of AA in Detroit, Mike Eshleman, the first man to become a member in Detroit and Ruby V., the first woman member in Detroit. All future inscriptions in the book were closed by unanimous motion of the group. The book was then hand bound and tooled in India Goat-skin, lettered in gold on the cover and presented to the North-West Group by its own members as a Christmas present to itself, in perpetuity, at Christmas, 1943. It was paid for from the treasury of the group at a cost of twenty-five dollars.

The inscriptions are as follows:

“Best wishes to a grand group in the finest of fine undertakings.” 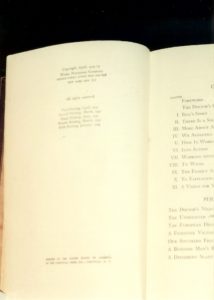 “To Detroit AA may they flourish forever.”

“May the Northwestern Group always have God’s richest blessings.”

“Congratulations to the Northwester group for their splendid work and
with best wishes for their continued service in the work of the Lord.” 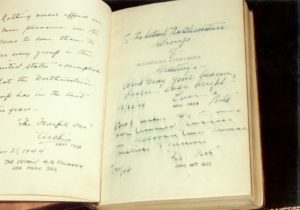 “Nothing would afford  me more pleasure in the years to come then to see every group in this United States accomplish what the Northwestern
Group has in the last three years.”

“To the Detroit Northwestern Group of Alcoholics Anonymous;
Greetings-and may your beacon, burn ever bright.”

“Best wishes to your continued successes in all your tests of using the
message.”

Sad to say, this book has disappeared; it would be nice to discover it again and bring it home to the archives, so that, it could be appreciated by everyone.