There are many myths and urban legends about Harbor Light in the metro-Detroit area. We hope this clears up many views. 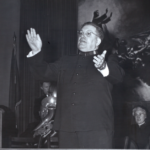 Tom Crocker was born November 8, 1894 at the Newbery, Michigan County Jail. His father was the sheriff of the county. Coming from a large family and often interacting with the inmates he probably was exposed to the effects of alcoholism.

He started his adult life getting drunk, but getting by. Today we would call this a “functional alcoholic.” Drifting from job to job, he eventually enlisted into World War I. Tom was discharged at a base in New York, eventually taking a train from there to Detroit, drinking all the way.

Margaret Troutt, author of “Cap’t Tom” writes, of the Skid Row, Detroit, in the 1930s, “A decaying business and residential area overrun by bars, pawnshops, flophouses and greasy spoon restaurants. Where men curse often and fluently against everything and everybody, where dirt and filth prevail, where hate and fear destroy courage.” 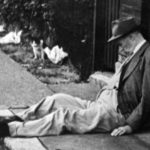 According to the Detroit Free Press, ‘A city within a city where an estimated 5,000 men live—most of them chronic alcoholics—stumblebums, human derelicts.’ Skid Row inhabitants drink rubbing alcohol, cheap wine, canned heat, “bay horse”—a mixture of bay rum and other after-shave lotions—all kinds of concoctions to get the alcohol they crave. Winds blow rotting garbage, filth of all kinds from the gutters into the faces of the human debris who stagger along the sidewalk. But Skid Row habitués are used to dirt and bad smells. Men sleep where they fall, in doorways, on the sidewalks, where they are often scooped up by police and taken to jail in the paddy wagon. Those who pass out in the alleys or ‘jungles’—weed-choked vacant lots—are usually left alone until the police rout them out at daybreak.’ 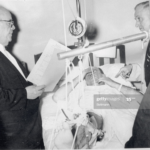 If a man has a quarter he can get a bed in a flophouse dormitory, called ‘fleabag’ or ‘scratch house.’ A private room in a cheap hotel is a little better, but not much—a small cubicle with bed and chair, walls of plasterboard or chicken wire running halfway to the ceiling, smelling of filthy mattresses and blankets. Where clothing lockers are not provided, men sleep fully dressed and place their shoes under their head.”

Tom Crocker was in and out of jails and asylums since moving to Detroit, even losing a great job as clerk for Judge Gillis. His body was being totally ravaged by alcoholism, to the point of losing the use of his legs. He had become known for being a liar, a cheat, a thief, and a perpetual drunk. He lost job after job, become institutionalized and jailed more times than he could count, dabbled with drugs, lost his friends, become dirt broke, and ended up living on the streets of Detroit. 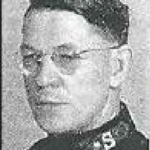 In one last black-out in Cass Park, he awoke not having feeling in his legs. He instantly yelled to God and pleaded for the return of strength to his legs, which did in a few hours. He then stumbled into the newly open Harbor Lights, at Michigan Ave and Cass Ave where he got on his knees and surrendered to God. That was October 7, 1939. At this point two men had crossed paths and became life long friends. Tom Crocker and H. R. (Mike) Eshleman who’s last drink was September 4, 1939. These men had ran into each other drinking in the dive bars. Tom went the way of the Salvation Army and Mike the way of Alcoholics Anonymous.

These two friend would always support one another, Mike sending Tom drunks to detox and Tom sending recovering alcoholics to Mike to continue learning a program of recovery. 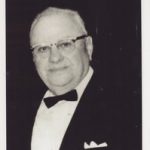 When the Detroit Bowery Corps, later to become the Harbor Light Center, opened on Michigan Avenue in 1939 by Adjutant George Bellamy to aid the homeless man, no one imagined it would become the large multi-faceted, spiritual and social service agency it is today. The Harbor Light, as we know it today, slowly evolved under the direction of many officers and the efforts of unheralded soldiers and converts. It seemed that as each need was met for the homeless, and those afflicted with drug and alcohol addictions, a new challenge presented itself and the Harbor Light Center was there, pioneering a continuum of care approach that still exists today. 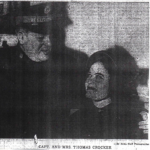 Tom stayed sober, but never went back to work, deciding to make it a career to work out of the Salvation Army with the Detroit Bowery Corps and help other suffering alcoholics. Tom went on to create a program called Harbor Light, which he eventually would set them up all over the country based on the one in Detroit. Doing all this wonderful work he was eventually raised to the rank of captain in the Salvation Army.

He was probably one of the most unique Commanding Officers of the Harbor Lights. A man who overcame his own addictions to alcohol and drugs living on Detroit’s Skid Row. Saved through Jesus Christ at the Harbor Light, and grew to show countless others God’s Grace and Love. He also helped to create and establish the Harbor Lights in San Francisco, Los Angeles, Indianapolis, Minneapolis, Washington D.C., and Chicago. 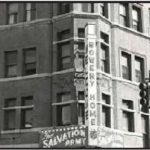 He would always say, “It is our dream to establish on the Skid Row of every large city in this country a Harbor Light – penetrating into the dreary darkness of the squalid flophouses, the sordid saloons, the littered alleys – a light penetrating into the darkness in the souls of those unhappy and desolate human beings who so desperately need our help.”

The facilities at Harbor Light were very limited at first. Tom knew that a detoxification unit was needed, along with more beds and equipment. Gradually the facilities were enlarged, often through the financial help of interested friends.

As word spread about the conversion of Tom, he was invited to speak at service clubs and always presented the needs of Harbor Light. Local businessmen helped finance many projects at the corps. One of these men, himself a converted alcoholic, was Mike E., owner of Springfield Products Co. in Detroit. He became Tom’s close friend and benefactor throughout Tom’s life.

The Harbor Light had a modest beginning as a “Soup, Soap and Salvation” mission aided by the efforts of its own converts. The Corps continued to grow over the years in services and programming. Just after WWII the Harbor Light acquired additional space and instituted a basic spiritual and work therapy rehabilitation program designed especially for Harbor Light clientele. A historic change came in 1962 when urban renewal forced the Harbor Light from Michigan Avenue. Major Kenneth Stange acquired a residence for the men in the program. With this residence, and its complement of new facilities, it became possible to expand the community services to include medical service, prescriptions (made available through World Medical Relief), transient welfare and many other services.

The Harbor Light began a comprehensive treatment program for persons addicted to alcohol in 1969, followed by a program for narcotics in 1971, and the inclusion of women in the programs in 1973. In May of 1979, the Harbor Light opened its first satellite center in Monroe, followed in September of 1979 by a second satellite center in Macomb County (the original site opened in Warren, but the current location is in Clinton Township, MI.) Since the 1980s, the Harbor Light continues to evolve and is now one of the major providers of substance abuse treatment in the area of corrections (for the State of Michigan).

Since that time, Harbor Light and Alcoholic Anonymous have enjoyed a close relationship of co-operation, but never an affiliation.