Archives: THE FINAL PLACE FOR THE CHRONIC ALCOHOLIC 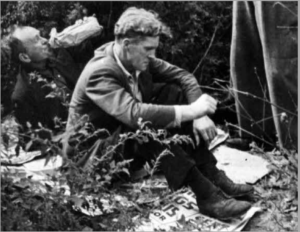 Skid row or skid road is a shabby urban area with cheap taverns, dive bars, dilapidated hotels frequented by lowlifes, alcoholics, and itinerants. The term skid road originally referred to the path along which timber workers skidded logs. Its current sense appears to have originated in the Pacific Northwest of the United States.

Areas identified by this name include Pioneer Square in Seattle; Old Town Chinatown in Portland, Oregon; Downtown Eastside in Vancouver; Skid Row in Detroit and Los Angeles; the Tenderloin District of San Francisco; the Catherine Street District in Montreal; and the Bowery of lower Manhattan. 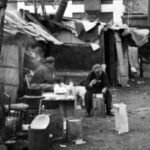 Hobo jungle by the railroad

Detroit’s Skid Row is a decaying and residential area overrun by bars, pawnshops, flophouses and greasy spoon restaurants. Where men curse often and fluently against everything and everybody, where dirt and filth prevail, where hate and fear destroy courage.

According to a 1936 Detroit Free Press article, “Skid Row is a city within a city where an estimated 5,000 men live—most of them chronic alcoholics—stumblebums, human derelicts.” Skid Row inhabitants drink rubbing alcohol, cheap wine, Canned Heat, “bay horse”—a mixture of bay rum and other after-shave lotions—all kinds of concoctions to get the alcohol they crave. 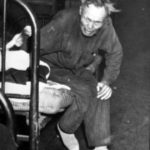 A day on skid row begins at 7:00 am, when the bars open. From 6:00 am on, men are stirring in the flop houses and alleys, crawling from under newspapers or lean-tos in vacant lots and dumps, emerging from abandoned basements and from beneath parked semi-trailers, to be on the Avenue by the stroke.

A few uniformed policemen from a paddy-wagon rouse the men who aren’t stirring, loaded them up. They will be taken to court in front of Judge George T. Murphy. One fellow will be the 129th arrest, the 36th time that year; when Judge Murphy made a comment about his arrest record, the poor fellow responds, “Isn’t that grand,” he received 90 days at Detroit House of Correction (DeHoCo). 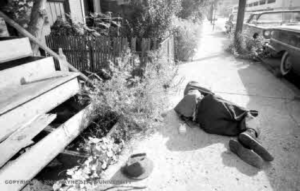 Drunk Passed Out on Sidewalk

It also revealed that men can come back from skid-row. Danny, a pleasant-faced fifty-four-year-old Irish-American who lives in Detroit, is a case in point. Statistically speaking, Danny has returned from the dead. For a quarter century he lived either on the Avenue or in the Detroit House of Correction, a guest of the city because of drunkenness. The normal end of the likes of Danny, used to be either the Wayne County Hospital, for the insane or the Wayne County Morgue. He eventually found a spiritual program. He is one of the 250 exhibits cited to prove the Motor City’s contention that skid row can be abolished.

The most noxious of several skid-row areas in the Michigan metropolis is a nineteen block section bounded by Cass, Howard, Fifth and Jones streets. For five roaring blocks this municipal cancer lies athwart Michigan Avenue, the main stem from the Michigan Central Railroad Terminal to the glittering downtown hotel district. 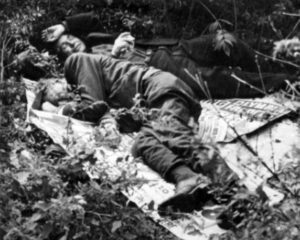 Drunk blacked out on railroad track.

Casualties of skid row are taken to Detroit Receiving Hospital. There are “wine sores” – foul smelling skin eruptions brought on by prolonged deficiencies of diet. There are broken bones, hideous head and eye wounds from falls and beatings by jack rollers. 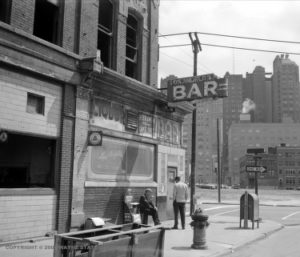 One of the many dive bars with hot cots