Archives: THE HISTORY AND EVOLUTION OF TODAY’S MARCH ROUNDUP 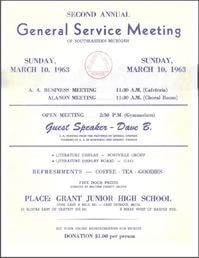 The March Roundup as we know it today had roots that go back to the middle of 1961. The General Service structure in the Detroit area was beginning to wane, from the way it was originally set up by Bill W, in 1950. Groups were springing up everywhere, but interest in General Service work was in the decline.

A group of people decided to put together a kind of gathering which included General Service Representatives (G.S.R.s) and anyone else interested in General Service. It would be a 3-4 hour function with a light lunch and a speaker from the General Service Office (G.S.O.) in New York.

From 1964 to 1972 it was referred to as the “G.S.R. Rally,” then in 1973 some changes began to occur. The name was changed to “General Service Rally” and the event would take place over two-½ day periods. Each year a district would ‘bid” on it and it would take place in a high school gymnasium or a local auditorium. There would be a speaker from G.S.O. and a dance later with a live band. The Area officers at the time felt uncomfortable that not everyone was able to have dinner with the speaker, so they expanded it to include a Friday night dinner with the G.S.O. speaker, which would cost the princely sum of approximately $5.00 to $7.00.

Then in 1976 there were some changes, the name being changed from “G.S.R. Rally,” to the “March Rally.” This name change caused a slight rift with between General Services of Southeast Michigan and AA of Greater Detroit, fondly called “Ferndale,” which closely resembled their long time event named the “Spring Rally.”

The General Service Assembly declined to give the committee the requested $300.00 start-up money, but instead would give them $200.00 seed money, with no further requests for money. The “Rally” committee would go on to print 3000 tickets. This would also be the first year that the tradition of holding it on the second full weekend of March would be the designated weekend each year.

In 1976 the “March Rally” was held at the U.AW. Hall at Mack & Conner Ave, on March 14th. The speaker was Yolanda of G.S.O. and she was registered at the Holiday Inn on I94 and Connor Ave. the luncheon that day was “Dutch Treat.”

G.S.R.s and their spouses were invited to a smorgasbord at the Detroit-Cadillac Hotel on Saturday, March 12th at a cost of $7.50.

Hank S., Alternate-Delegate, Panel 27 reported that the 1978 “Rally” would be held at the Allen Park Civic Auditorium, near Southfield Road and I94 Expressway on March 19th. The “Rally” chairperson would be Jean P., the first female chair and that the registration cost would be $1.50.

There was a reception for the “Rally” speaker, Retha G., the managing editor of Grapevine Magazine at 7:00pm, March 18th at St. Bernard’s Seminary Hall at Telegraph Road and Ann Arbor Trail. There was to be a buffet dinner at the Hall beginning at 8:00pm with a masquerade dance following. The entertainment was music by the “Nobleman,” which played music from the 40s’ and up. A prize was offered for the best costume and the admission cost was a $5.00 donation.

There was an embarrassing break of traditions, when the “Rally” tickets were donated by a funeral home, whose name appeared on the bottom of the ticket. In the spirit of self-support and non-endorsement, members were requested to cut off the name from their tickets. The Rally committee also reimbursed the funeral home for the cost of the tickets. The speaker and some members stayed at the Presidential Inn in Southgate.

The 1981 “Rally” was held at the State Fair Grounds, March 8th and the speaker was Nell Wing. Nell was Bill Ws personal secretary; later she was to be the first activist of G.S.O. and was a non-alcoholic.

The 1986 “Rally” was held on Van Dyke north of 13 Mile Road. Ed G. was the “Rally” committee chair. The dinner was held at the Ramada Inn on Telegraph north of Northwestern Hwy, the “Rally” itself was held at Birmingham-Seaholm High School.

For 1988 only, this event was called the, “Southeast Michigan Area Conference.” The “Rally” was held at the Southfield-Hilton on March 11, 12 and 13. Yes, this was the first three day convention, but it was not to happen again until 1992.

This convention had had two speakers, Jack W. East-central Regional Trustee, Past Delegate, Area 32, Central-Michigan. The other speaker was frank M., Archivist of G.S.O., who spoke at the “Rally” in 1977.

The 1989 “march Rally” was hosted by the Port Huron area and held at the McMorran Place on March 12th, being just a one day event.  The speaker was John G. of G.S.O.

On March 11, 1990, we would hold the last 1-1/2 day “Rally.” It would be held at the Pontiac Northern High School and would feature guest speaker Richard B. of G.S.O. and dinner tickets would be $7.00. In late 1990 Adam T., Delegate Panel 35 (85/86) suggested setting up an ad-hoc committee for conventions and rallies, that the sole aim of either is to raise funds to send the Delegate to New York for the delegates conference in April. It was the sense of the assembly meeting was that we have a rally. During this General Assembly meeting, District 14, led by Bob McC. and Ralph M. agreed to host the rally.

At the December 12, 1990 General Assembly meeting, the newly elected Delegate, Ken K., Panel 41 (91/92) made a motion that we have a permanent committee for the “Rally,” to help us keep track of our obligations and assure a timely beginning of the planning.

On March 9, 10, 1991, at the Novi Hilton Hotel we held the March Roundup/March Rally. This gradual name change would begin the gradual healing process between General Services of Southeast Michigan and AA of Greater Detroit. The “Roundup/Rally” would be on Saturday and Sunday with the guest speaker being Sarah P., of G.S.O.; District 14 hosting an Alkathon on Friday evening. Bob McC chaired this event proving it could be successful.

In 2003, it was decided by the General Assembly that it was better off for everyone involved to break apart the State Convention and March Roundup, which we had enough resources to put on both affairs. It has been that way ever since.

The March Roundup continues to grow and break new milestones, getting as many people involved with it, to make it an enjoyable event for the whole family.